Ranked battles are a new battle mode, which is expected in update 9.19 and is already being tested on the test server. Fights consist of seasons and stages, after which the player receives awards, chevrons and a new currency. Interesting?

What is ranking battls in the World of Tanks

Ranked battle – a random battle on the 10 level technique, where the main goal of the player is to show high combat effectiveness. Ranked fights are noticeably different from traditional ones and now you will know why.

The main differences between ranked battles

If it’s simple: let’s say the season lasts a month, then the stage lasts a week. Then in one season 4 stages. To be the best of the season – you need to be the best in every stage. The player can score from 1 to 5 ranks for the stage and at the end of each stage statistics are given on which the tankman sees his and other people’s results.

After – the statistics is reset and a new stage begins. To lose the first and last (fifth) stage is impossible. The second, third and fourth – it is possible, if to show bad results in ranked battles. 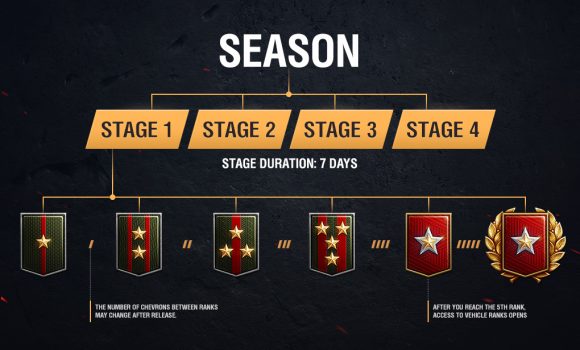 There will be winners in the team of the losers

Even if the team lost, the first three places in the statistics after the fight will be awarded ranks. So developers identify the best players whose skills do not depend on the skill of all in the team.

Bonds is a new game currency, which is awarded for effectiveness in ranking battles.

Advanced equipment can be bought for booms (in advance, developers warn that the cost will be high). Such equipment differs from the standard with improved performance. For example, a senders with a -15% recharge time.

Tank FV4202 will be replaced on Centurion Action X
Full list of changes for update 9.18
New HD models and a new SPG T3 HMC
World of Tanks Update 0.9.5. All the details! Released!